When Dr Aimi Nishimura first arrived in Central Otago on holiday she knew that this is where she would return.

Originally from England and Japan, she studied at St Andrews in Scotland and in Manchester, UK. After working as a doctor in southern England, Aimi moved to New Zealand in 2016 and worked in Christchurch Hospital for several years before starting her career in general practice. She enjoys the variety of general practice and has a special interest in elder care.

When she is not at work, Aimi is usually found exploring the region’s beautiful walks with her husband and her dog.

We're not around right now. But you can send us an email and we'll get back to you, asap. 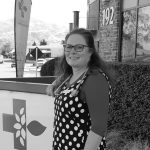